Today we packed up to leave the Holiday Inn Express in Custer, SD. The property is great with a complimentary breakfast each day and a beautiful patio to eat it on. We were able to take advantage of the laundry facilities as well so everything that got loaded into the car was smelling fresh.

We started off the day by heading back into Custer State Park. We visited the Coolidge lookout tower, which is on one of the highest peaks in the park. We could see the Crazy Horse and Mount Rushmore monuments clearly with binoculars and we had excellent 360 degree views of the area. For those that don’t like to hike, this had to be the least strenuous way to get the lay of the land.

Back in the car, we headed for Needles Highway. This road was an engineering feat that wound through valleys and along ridge lines, making its way up to the park’s famed “needles” rock formations. Along the way, you pass through two road tunnels that are barely wide enough for a single vehicle at a time. Near the end of the route (at least in the direction that we traveled) was Sylvan Lake and its lodge.

Sylvan Lake is man made, but it is beautiful! There is a 1.3 mile hike around the lake which is fairly simple except for one short section that requires a short climb and the ability to traverse some fairly large steps. The views are definitely worth the effort, however. While you’re there, you can rent kayaks, canoes or paddle boats. There is fishing available and a couple of small beach areas for those that want to take a dip in the refreshing mountain water. We hit the lunch counter in the camp store and then made our way out of the park, passing through one more narrow tunnel on the way. Custer State Park is a gem, and there is so much to do in the area that you could definitely plan a 3-5 night stay with no worries of growing bored.

From there, we headed up to Spearfish Canyon. The scenic byway through the canyon is a beautiful drive, winding along a spring-fed creek with crystal clear water that keeps you company for the entire 14 mile route. We stopped to make the short walk to both Roughlock and Spearfish falls. Both required a fairly steep climb to get out after the visit, but they were short and very much worth the effort. During our stop at Roughlock, Josh spotted several trout in the waters below, which reminded Sherry of another attraction she had considered visiting.

The DC Booth Historic Fish Hatchery in Spearfish is a free family attraction where you can learn about fish hatcheries and feed some fish. There’s a hatchery museum and some other sites to visit on the property. The most unique might be the replica of a fish transportation train car that the hatcheries used to utilize to transport fish stock all over the country. The history was interesting, but I can’t imagine the smell the men who tended the cars for months at a time must have endured. It was a nice break and the family really enjoyed feeding the fish. 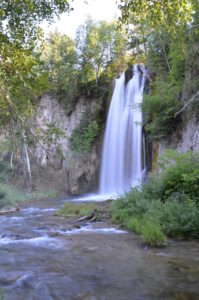 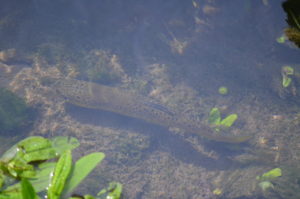 One of the fish spotted in the water at Roughlock Falls. 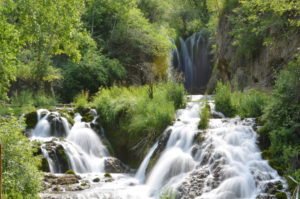 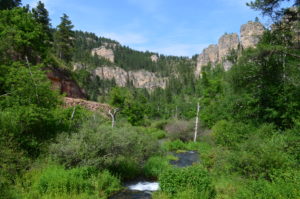 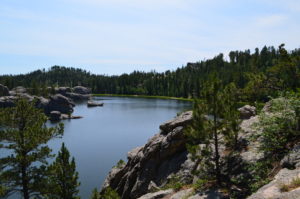 Sylvan Lake from one of many stunning viewpoints. 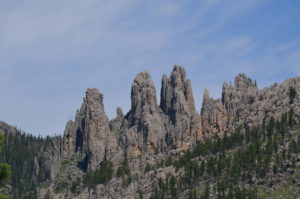